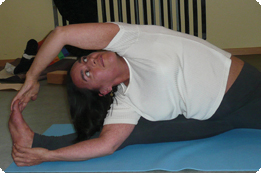 In 1982, she discovered Iyengar Yoga with Jean Bernard Rishi with whom she was mainly trained in do in, shiatsu, ayurvedic massage and Korean relaxation.
Through him, she met Pierre Gariel - her first teacher and then Martine Le Chenic, as well as Daniel Rougier with whom she continues to train to this day.

Her passion for this art led her to stay many times in India (till 2019), where she receives the teachings of BKS Iyengar and also of his children Geeta and Prashant. She makes other trips devoted to Yoga in Europe, Israel (Rachely Cheney) and the USA.
Nowadays she also practices with Rajvi Mehta and Zubin Zarthoshtimanesh, both based in Mumbai.

From 2006 to 2008, she took a course in yoga therapy with Stephanie Quirk, certified professor of the Iyengar technique in Germany. In 2015, she meets Noëlle Perez [then aged 90], Iyengar's faithful disciple, who predicts her she will edit a lot of her writing. Particular development on the notion of aplumb. In 2019, she starts following Rachely Cheney's teaching. Rachely is an Iyengar Senior teacher and lives in Israël. 2020 continues true Zoom with Rachely on a weekly basis, until today..

She has followed , the teachings of Dr. Yves Turenne, assisted by his wife Jeannine (Europe - Quebec) from 2003 to 2008 to continue with the Radical Aliveness and the Deepening Program of Dr. Richard Moss (Europe-USA) from 2008 until today.
In 2013 she discovers the Maha Kumb Mela [22 days] while attending the teaching of Sai Maa and Prem Baba. SInce 2016, she continues on the path with Dominique Bigé.

Certified Practitioner in Neurocognitivism (I.N.C. 2013), she has developed a practical stress management workshop for companies (2012), during her 29 year career for Bruxelles Formation, in communication skills.
Without prerequisites or props and open to all, it is completed by short movies on line - to help the students concretise the practical aspect on long term. Slowing down...

Viviane organized 4 yoga-stays in Tiruvannamalai (2014-2018,Tamil Nadu, India), allowing 30 people to discover this town, built around the holy mountain Arunachala, where Ramana Maharshi spent the major part of his life. For most of the participants, it was their discovery of India