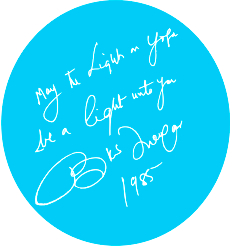 "May the light of yoga be a light unto you"

"May the light on yoga be a light unto".

In "The Paths of Yoga" published in June 1994, Viviane Gutlerner speaks in an artcle of Sri BKS Iyengar, whom she met many times during her study trips to India (Pune).
She mentions, among others, the anchor of consciousness in the physical activity, access to the spiritual through the body, purification of the mind and intelligence of the body.

May the light on yoga be a light unto you.

B.K.S. Iyengar wrote these words in my copy of A Light on Yoga and they became an integral part of my practice since. The light : let the light of your consciousness shine, allow it to penetrate and integrate every single part of the body, to search inside the self for the discovering, perception and sense of the different trajectories of the muscles, the bones, the movement of the skin, the energy and the different ways of expression of the internal organs and finally the emotions. What is particular about the bodywork under the direction or following the instructions of B.K.S. Iyengar, is the introduction of the dimension of consciousness in a physical activity and thus attempting to reach the spiritual through the body.

On many a spiritual path we try to establish a link between the personal consciousness and an expanded consciousness ( whether we call it God, the universal soul, cosmic force etc.) while completely ignoring the body. For B.K.S. Iyengar it’s the profound understanding of the body that leads to the spiritual realisation, he makes it quite clear using the image: “ My body is my temple and the asanas are my prayers”. There is a fundamental difference between the energy produced by the body during just any physical activity, or the one produced during postures or movements linked to a spiritual quest. The alchemists were also looking to expand the consciousness through inert matter.

For B.K.S. Iyengar the material we need to shed light upon is the body, on all different levels, even the cellular one. This is why he pushes back the apparent limits of the body. To find there a simple “brutalisation” of the body is to ignore its profound goals. He only asks for extraordinary efforts of the body while listening to it with the deepest concentration. Doesn’t he recommend us as well to nurture our body like that of a child? He also stresses the interdependence we express through postures between the earth and us. He teaches us that in order to feel if a posture (asana) is well balanced, we have to make sure the part touching the floor is positioned correctly.

THE MENTAL PURIFIES ITSELF

Now, to return to the concept of interior light, all of those engaging in the quest for unity (physical, mental and spiritual), at a certain moment, have to surpass their limitations. Both physical and mental. In the work as transmitted by B.K.S. Iyengar, the mental purifies itself by abandoning every goal and all sensations.  Joy and suffering amongst others are sensations that colour the spirit and form veils.  If during asanas we can remove those veils, we reach a state beyond joy and pain, a state of serenity. So how do we surpass mental limits while working with our body? By turning our body into a servant and not a master, for if our body is a runaway horse that takes us where we don’t want to go we’re not in control at all and will never reach this unity we’re looking for. Here’s how to proceed: by making the brain silent and attentive during practice; by always considering ourselves “novices” each time we go into a posture and by observing our body from within.

THE INTELLIGENCE OF THE BODY

B.K.S. Iyengar shows us there can be no genuine intelligence, or knowledge so to speak, if the body is not a part of the research : this type of intelligence is often ignored in the west.  We only acknowledge the intelligence of the intellect while forgoing the intelligence of the body. We have to make contact with the emotions and with the intelligence of the heart. Also to communicate through breathing, in order to remove all successive veils that hide the Truth of being. To accept the permanent insecurity linked to the discovery and movement of life. And finally to feel when the allotted time has passed and allow death to come naturally, in a receptive and peaceful body.  To allow oneself the possibility to go out like the flame of a candle, gently. To do that, we have to enable ourselves to abandon us to the Lord that resides in all of us and find there the unspeakable…

Born in 1925, Noëlle Perez, one of the first Westerners that studied with BKS IYENGAR, left us on 8 August 2019 [link to only french version found] to join her husband and prince, Jose Miguel.

From her early years, Noëlle was "looking for God", and despite her deep studies in her own religion, what she found there didn't satisfy her. She went on to explore other mysticisms, and in this way, after having studied the Oriental Churches, Catholic and Orthodox as well, she explored different branches of Protestantism… and from there she moved on to Buddhism… and then to Yoga.

But before 1959, yoga schools in Europe were few, and what she found there was what could be called "the gymnastics of yoga", or a certain kind of esoterism without any deep roots in reality. Link to the only french version found. Then, in 1959, she met BKS IYENGAR. Bibliography FR/EN + french text.